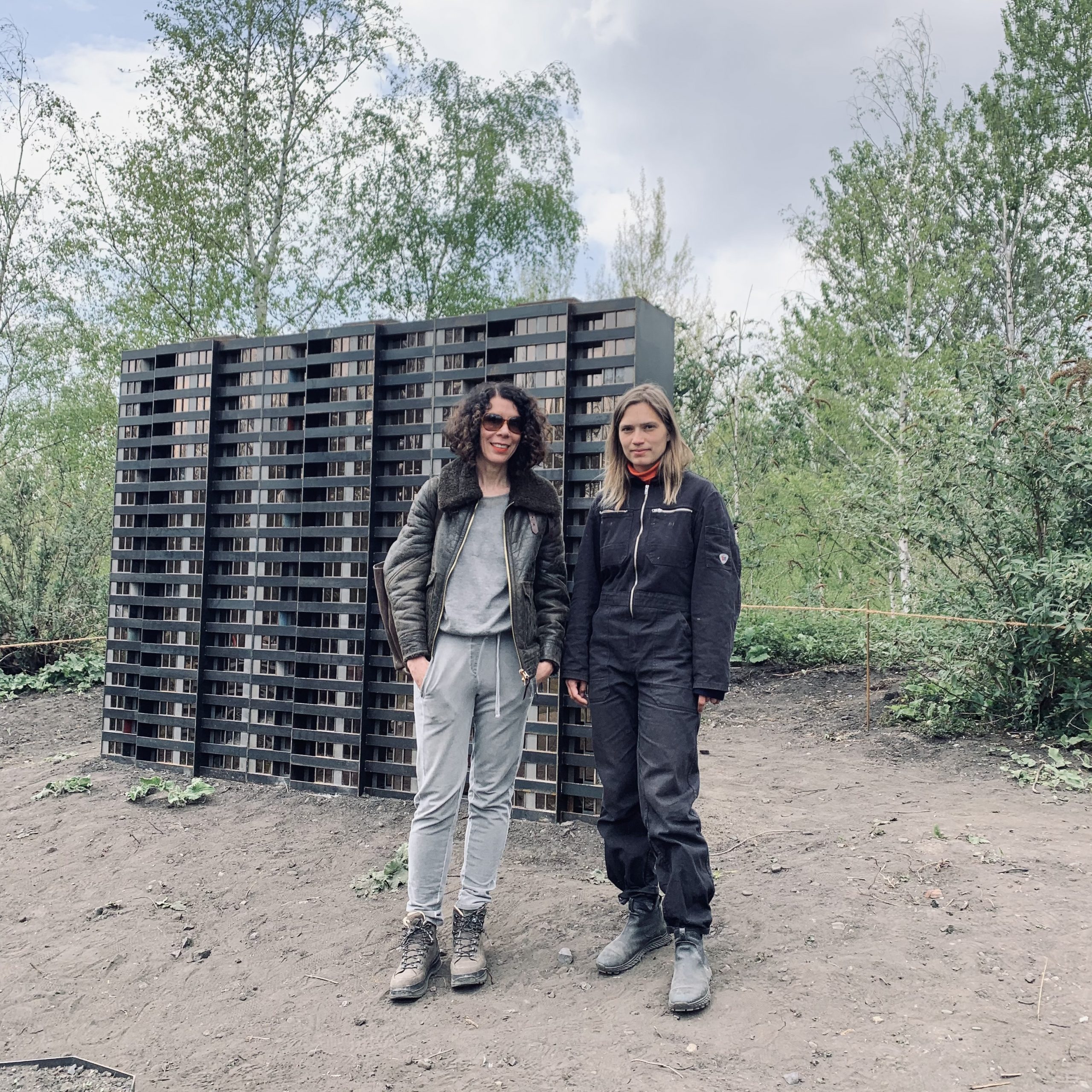 “We have created an anti-vision, an anti-reality.” Artist Julius von Bismarck and architect Marta Dyachenko have set up a city model with inexistant buildings on a mound of earth on the banks of the Alte Emscher in the north of Duisburg. Or rather: With buildings that have ceased to exist. Two miniature streets run up the dirt hill. There is the Bergkamen residential tower, the Essen school complex, the Marl indoor swimming pool, the Duisburg church, the Dortmund power station, and the Oberhausen bunker. All of them have disappeared from their respective neighbourhoods already. 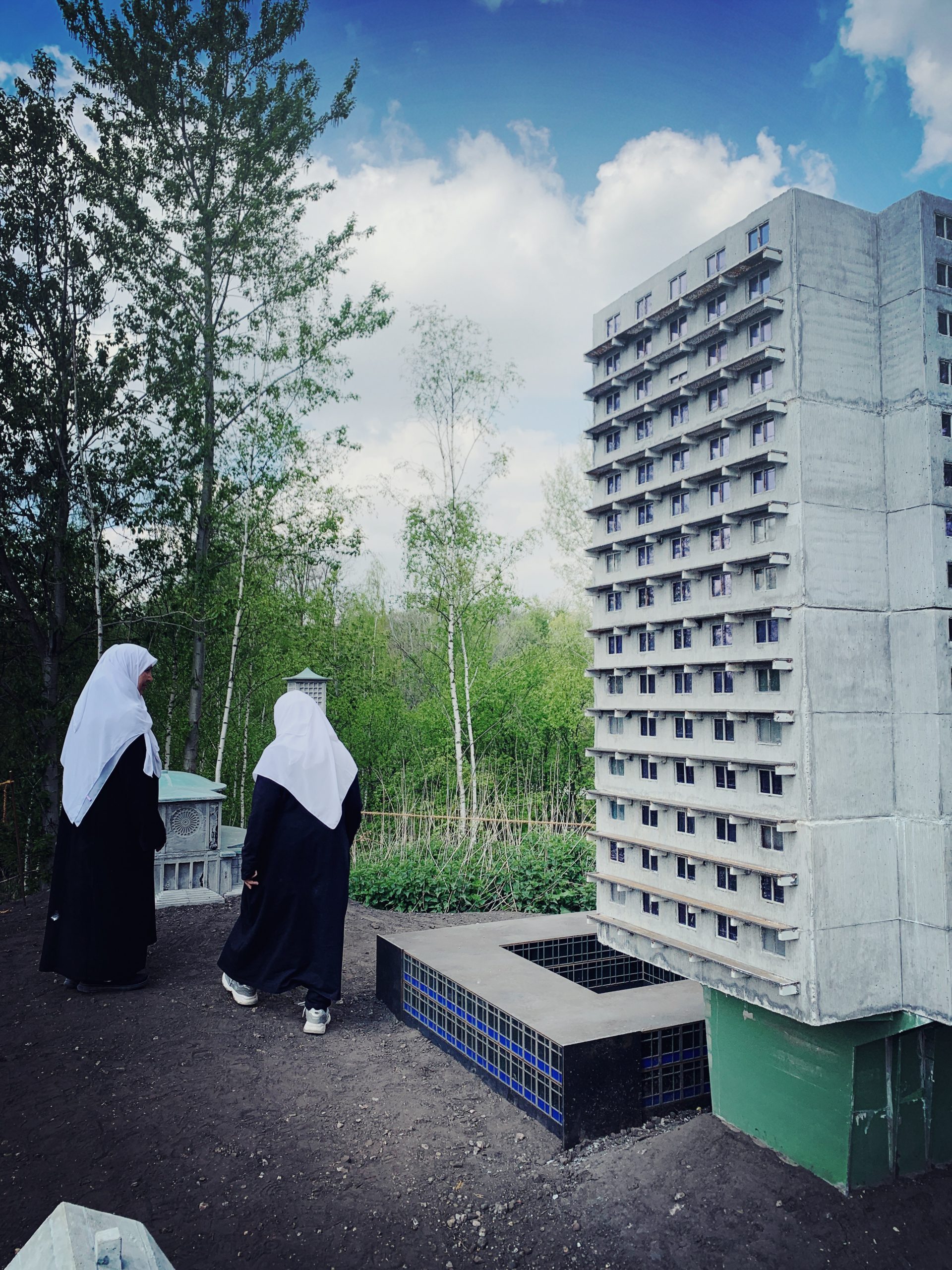 Von Bismarck and Dyachenko have reproduced a total of 23 buildings on a scale of 1:25. The curious and lovers of art are taking a stroll between and around the models, touch their washed concrete reliefs, and try to catch glimpses of the interior through the tiny Plexiglas windows here and there, as if hoping that the scenery would continue on the inside. Traffic is racing across the bridge of the A42 quite near the art site, adding the urban soundtrack to the work. This piece belongs to the Emscherkunstweg, a route leading through the northern Ruhr region. It currently sports a total of 19 publicly accessible sites. 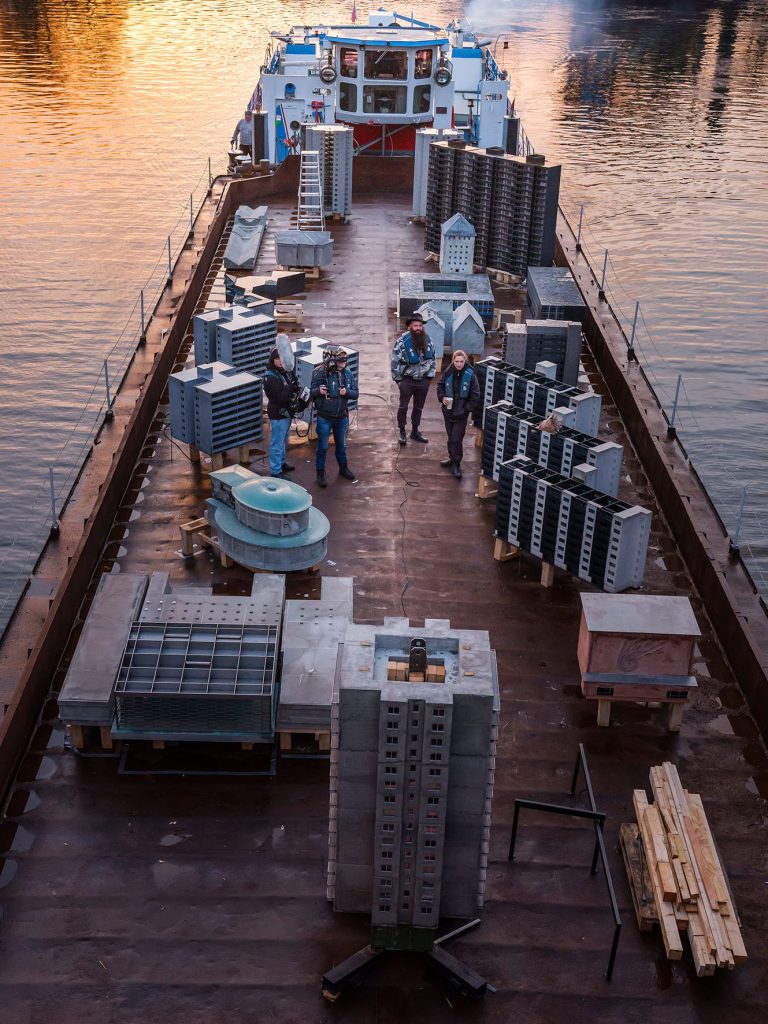 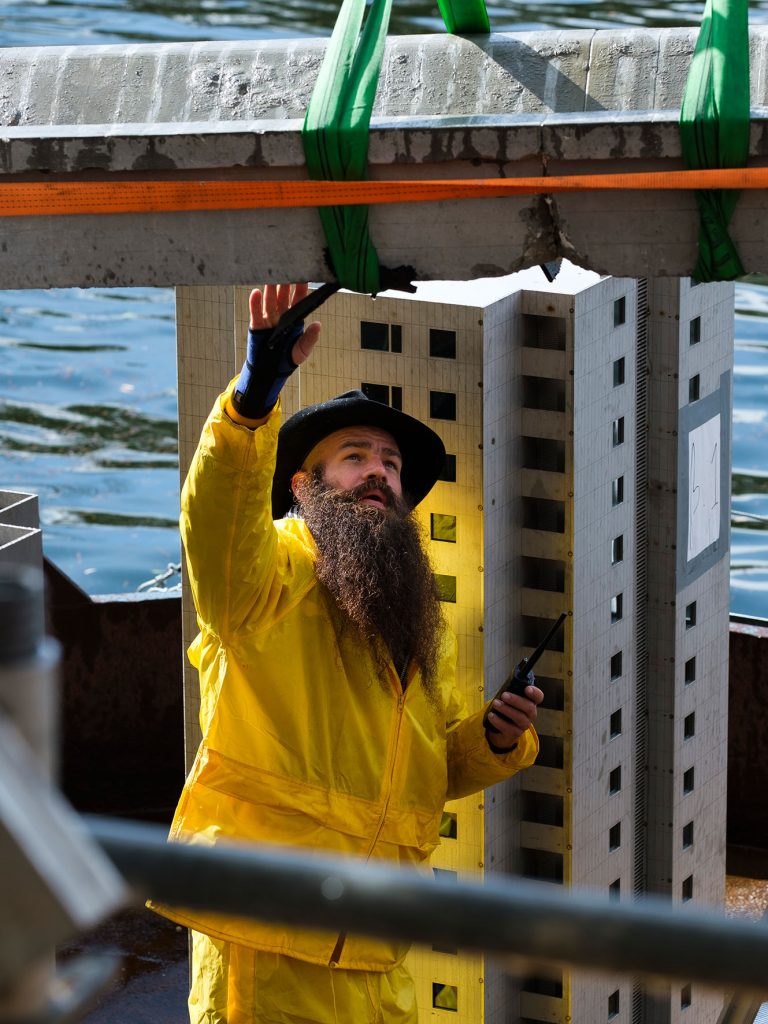 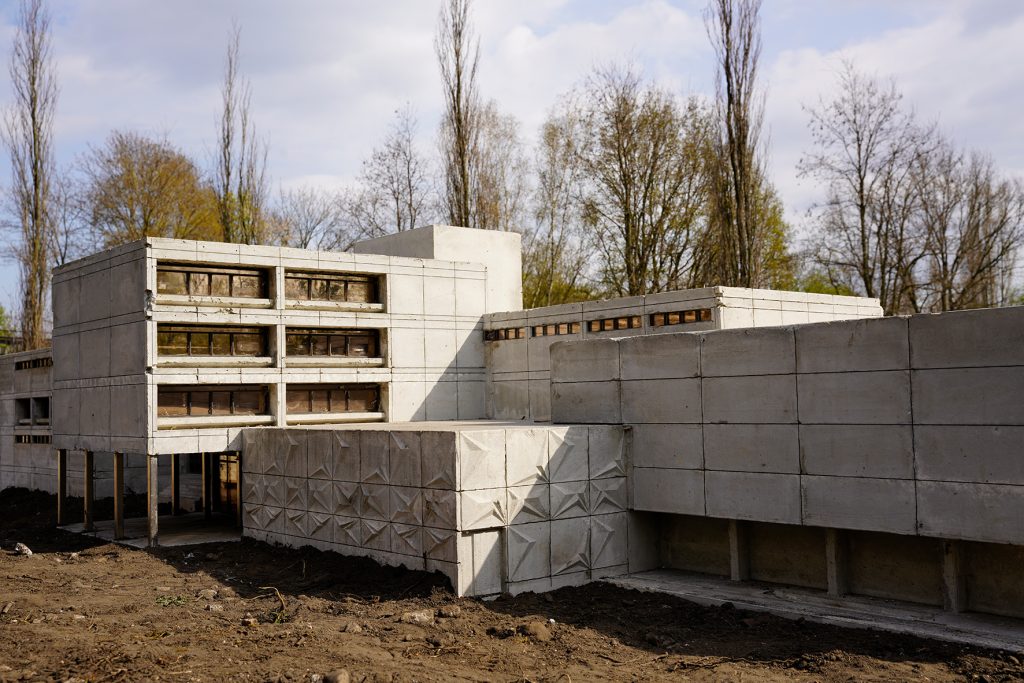 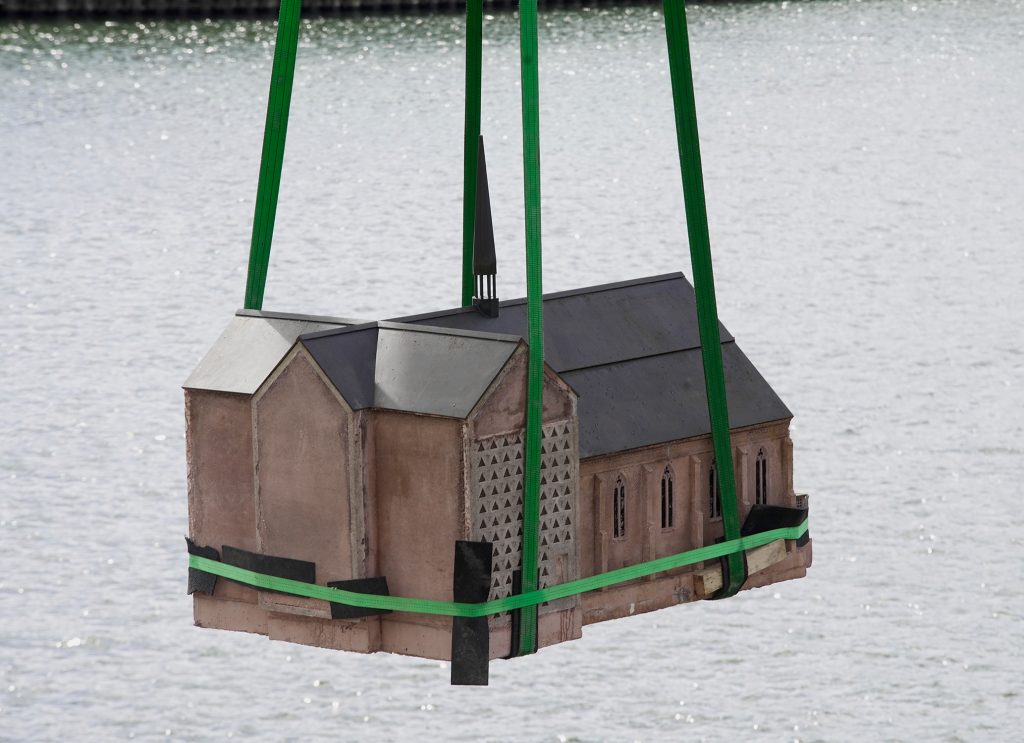 Nearly all of the buildings placed in the artist duo’s miniature ‘Neustadt’ originally date to the second half of the 20th century. Most of them hail from the 1960s and 1970s, when boundless growth seemed attainable, and architecture was trying to find forms of expression to match a morphing society. The imagination of their original creators is reflected in the buildings’ gigantic sizes, geometric structures, and bold formal language. Still, von Bismarck and Dyachenko did not pick their objects based on any aesthetic criteria. “We aimed to map a representative cross-section of local urban design. We started out by examining the kinds of buildings that were demolished in the last few years. With an eye on typology, we then chose some representative objects, including educational institutions, bunkers, or public pools,” explains Dyachenko. “Though the houses are built in the model shape suggestive of their planning stage, these buildings actually have already ceased to exist.” 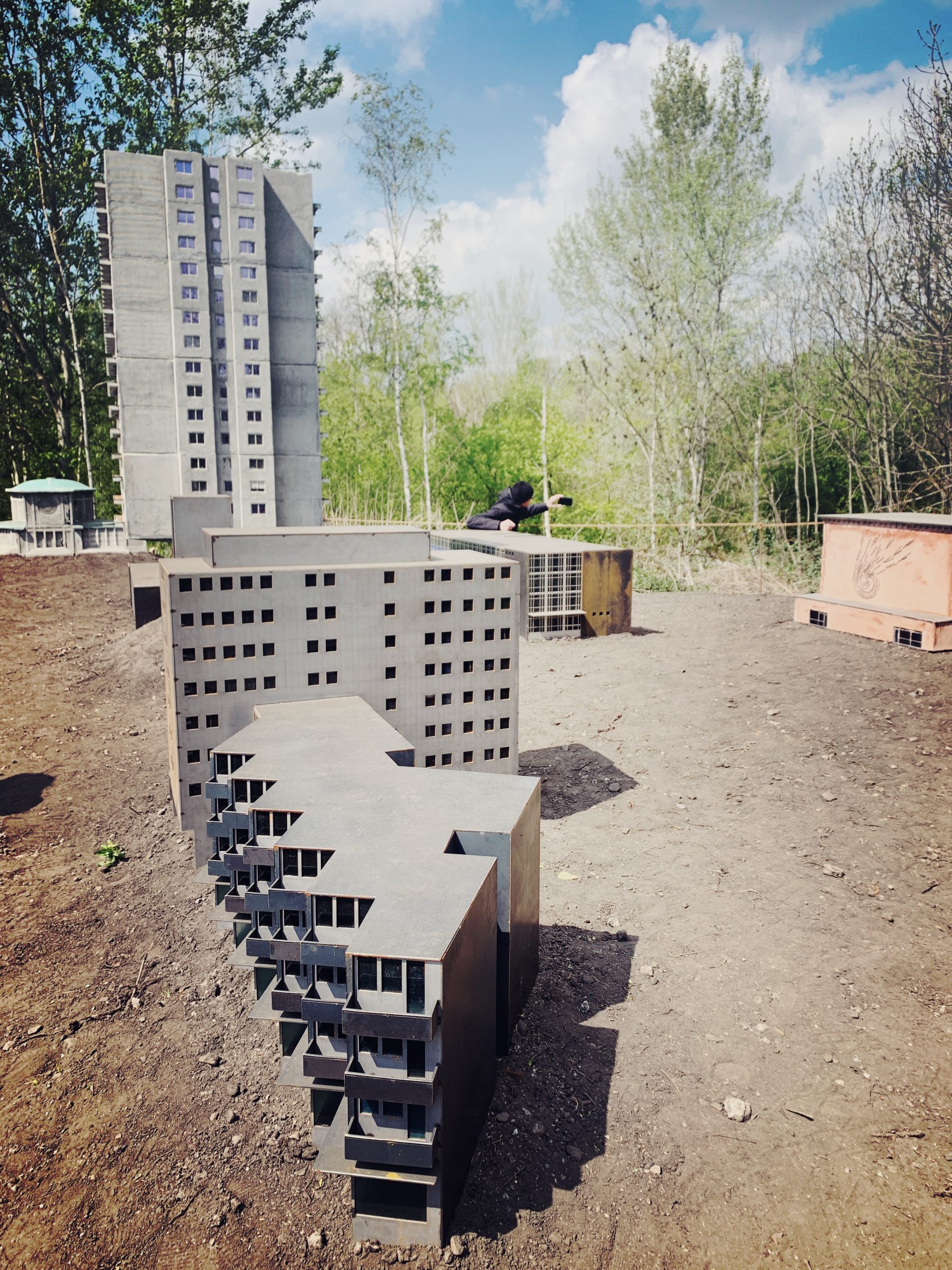 “This isn’t supposed to be a retrospective glorification of any one specific architectural style,” Julius von Bismarck adds. Social-historical parallels and differences between the Ruhr region and his home city of Berlin inspired the 38-year-old to take a closer look at Ruhr-region architecture. “Both areas are clearly marked by change. There is plenty of construction work going on in Berlin, as well as some demolition. The Ruhr region is seeing some construction and plenty of demolition.” All in all, von Bismarck says, both approaches culminate in essential changes. “The construction industry has too large an environmental footprint. We should think about what we build, and about what we tear down, too. We should consider what we declare a protected monument, and what we might repurpose.” 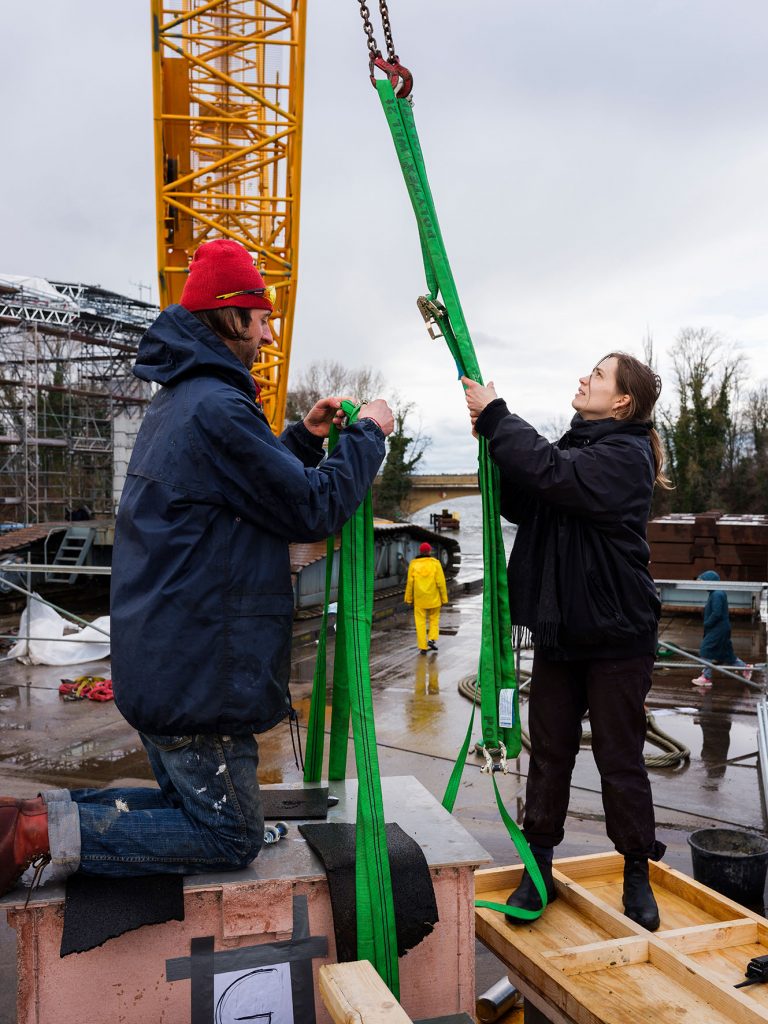 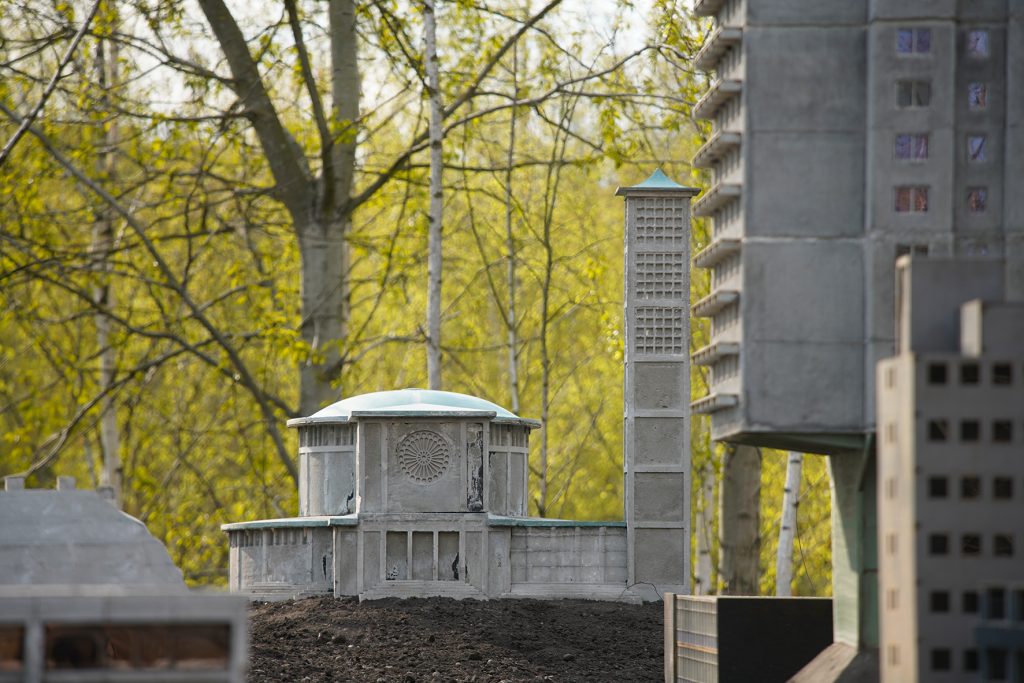 Still, this ‘new town’ is more than merely a monument to dwindling resources. It also bears witness to a euphoric belief in growth. The concrete of the boom years certainly felt destined to last forever, to create an indestructible home for our riches. Some of these objects subsequently turned into mausoleums.

The architect and the artist dedicated three years to research and to building their models, at times involving a team of 14 in von Bismarck’s Berlin studio. For a long time, they were not sure how they were going to take the buildings to their new home, the Landschaftspark Duisburg-Nord, before they eventually had an idea to solve their dilemma. Their city would swim through the country! In a week-long journey by barge, it was taken from the Spree river to the Duisburg port at ten kilometres per hour, turning what originally was a logistics act into a performative one to which the creators ascribe a “decelerating effect”. A film crew was on site to record the buildings’ poetic journey. The result is to be ready by autumn. “Then we can send the idea travelling,” says von Bismarck. 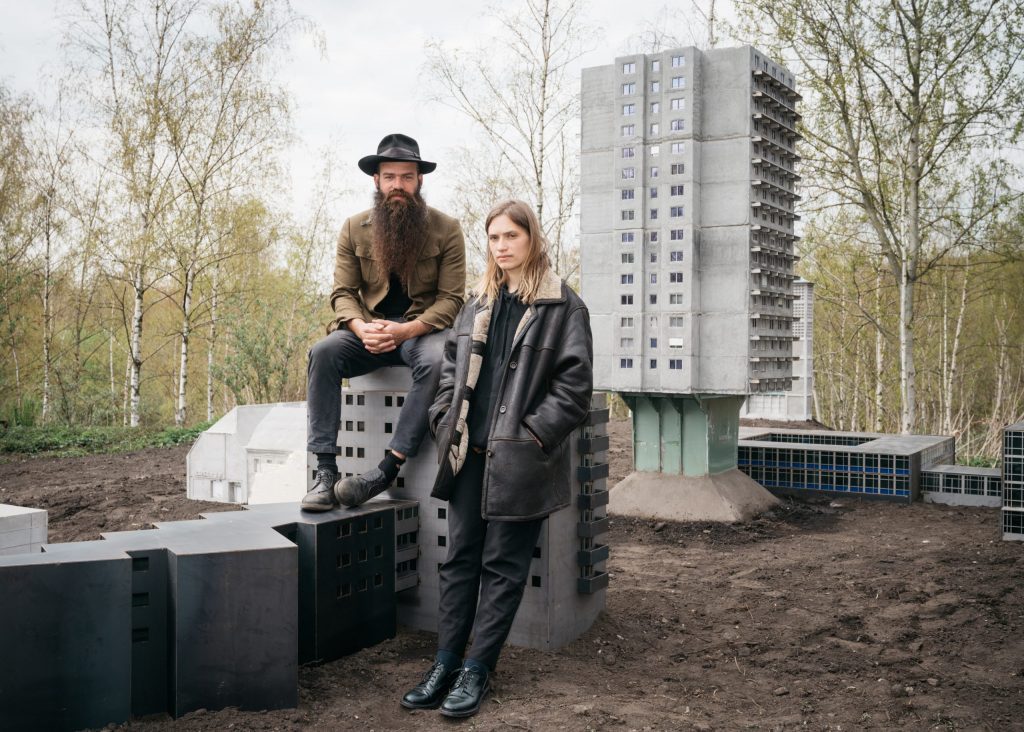 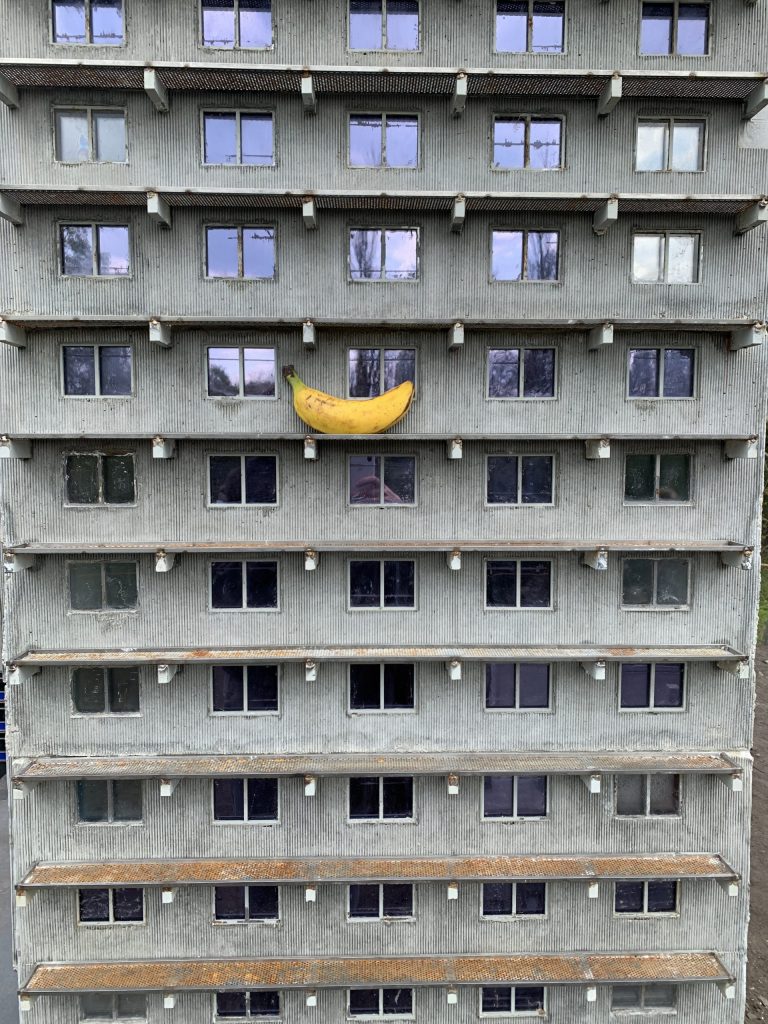 And what about the ‘new town’? It will disappear into greenery in the meantime. Nature is allowed, and even supposed, to reclaim its place between the buildings. Julius von Bismarck, whose work always revolves around the relationship between man and nature, is relying on the interaction between his sculptures and the growing wild plants along with the resulting changes to their respective proportions. The result may become symbolic. May a vision be growing in Duisburg after all? Could we be looking at a blueprint for the repurposed green city of tomorrow?