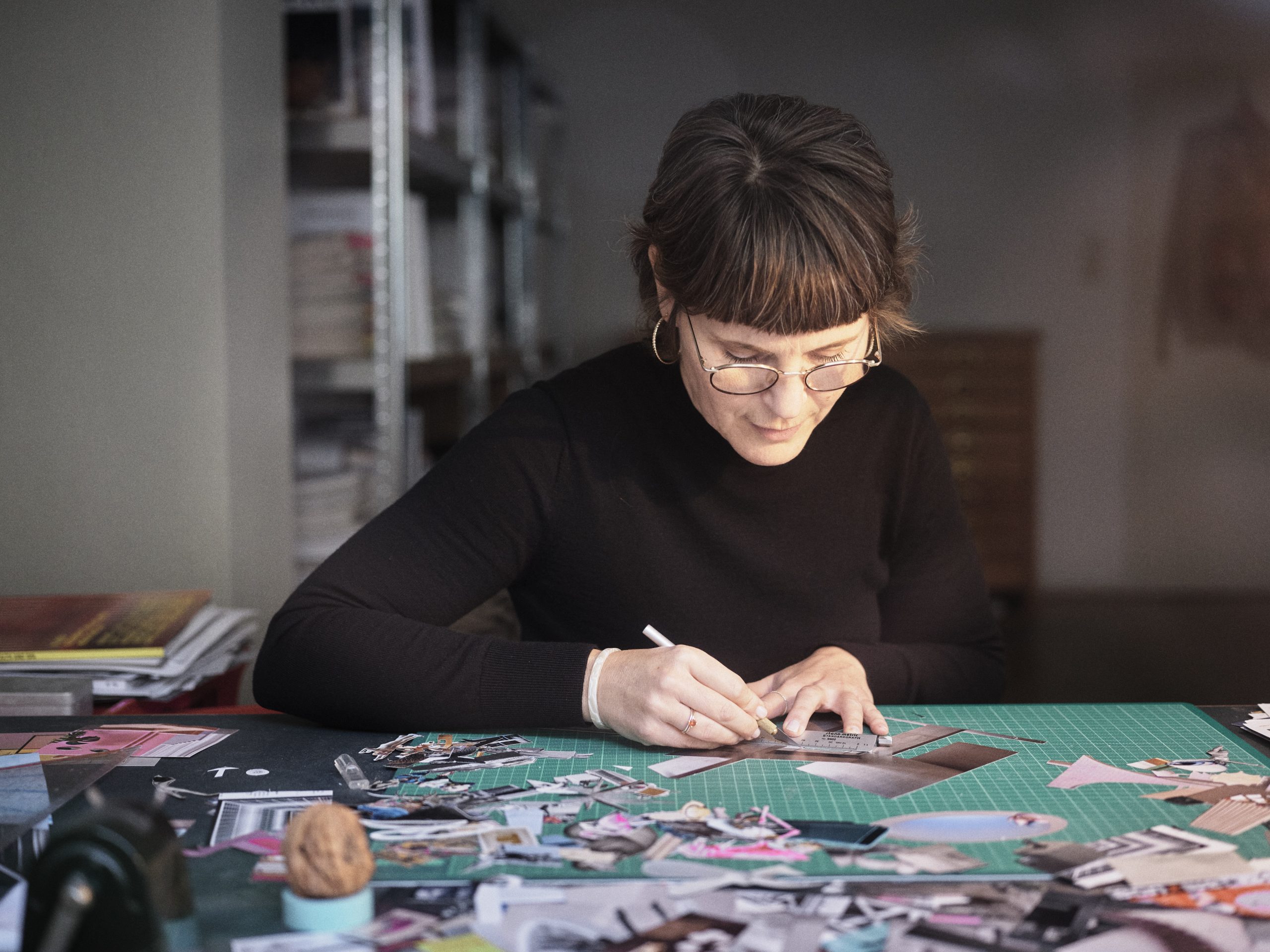 Düsseldorf-based artist Cornelia Greef is creating new worlds from images she happens to find in magazines with a scalpel and glue. Starting out three years ago, she keeps going to this day.

It was already dark outside that one winter night in 2019 when Greef had a go at her architecture journals. She had brought them with home from a trade fair and they had been lying around unread in her flat ever since. Greef folded down the small wall table in her living room, put the green cutting mat on it and picked up a scalpel to start dissecting those magazines. With a steady hand, she extracted concrete buildings, people, windows, curtains, eyes, and many other things, combining various elements by placing them side by side and overlapping. “Making collages is analogue work for me. I do not do any computer manipulation at all. Everything is used just as I find it and by arranging individual parts into something new,” Greef explains. This process shifts perspectives, changes proportions, and creates spaces that originate from reality. Greef finds this kind of artistic work to be downright meditative. To her, it is a pleasant counterpoint to her job in the architecture office: “My job often requires me to focus keenly. I need to have many things in mind at the same time.” Working with a scalpel and glue, on the other hand, does not following the laws of logic. It has a comfortably intuitive feel to it: “It just happens. I don’t have to plan anything for it.”

Greef explains about this sitting in her small backyard studio in Düsseldorf-Flingern, with innumerable cut-outs arranged on a cutting mat in front of her. There are a bust, a woman with bared breasts, a flamingo, and a teddy bear. Next to it all lies her tool, the scalpel. For the last nine months, since she stopped working from home, she has been able to just leave her materials in place when she is done. The magazine towers that were building up towards the ceiling in her living room around her workplace have been removed since. She still appreciates the luxury this affords her. Greef is dressed in dark blue straight leg jeans with black leather ankle boots and a simple black jumper. Her short fringes fall neatly into her forehead as if she had just come from the hairdresser. The window across from her desk looks out over the quiet yard with its many flowerpots, two green-painted metal barrels, and a wooden chair with peeling white paint. Though the November day is unusually mild, she has turned on the heating inside. She offers me coffee and biscuits. Her studio neighbour, a graphic designer, is not in right now: “She usually works here earlier in the day.” Greef prefers evenings or weekends herself. She comes over once or twice a week. She can’t find the time much more often anyway for the most part. The studio wall is covered in some of her finished collages. A tiny piece of paper pinned to the wall reads “Amore”. Magazines are stacked on shelves. art. dummy. flow. Whitelies. Vogue. The architecture magazine AIT. All of them serve as source material for Greef’s art. “I’ve been a good customer at the station bookshop ever since I started making the collages,” the 46-year-old is laughing. “I’ve also bought entire years of magazines on eBay or received them as gifts from friends, however.”

Greef has only exhibited her work twice so far, the second time just a few weeks ago. That was where we met. The show was hosted in a shop on Acker Street. It drew a pretty good result, with seven out of the eleven works exhibited sold by the end of it. “This time I had even made a price list beforehand,” Greef says. She found herself unable to answer questions about prices during her first exhibition. She clearly hadn’t expected anyone to want to buy her works. “I didn’t even know if I wanted to give them away at all.” Cornelia Greef is in no hurry. She allows things to develop in the time they need. When she started making collages, she wasn’t showing her work outside of her own inner circle at all initially. That’s her partner, their two children, and some close friends. Eventually, she decided to upload her collages on Instagram, where feedback accumulated. “These are great”, people said. Some added: “Why don’t you exhibit them?” Greef wasn’t certain. She? Exhibit? Was that even legit? Could she do that? She hadn’t even attended art school. Courage overcame doubt eventually, and she found a small exhibition space that she was allowed to use free of charge. Due to the pandemic, visitors were only allowed to come by appointment, and never more than two at a time. This was about perfect for Greef as she was able to respond to every guest individually. Her collages received the attention they deserved, too. “Uploading a picture to Instagram is rather anonymous. I’m a stranger to the visitors there. That is, of course, quite different in an exhibition. As an artist, I have to deal with people coming to see me there.” 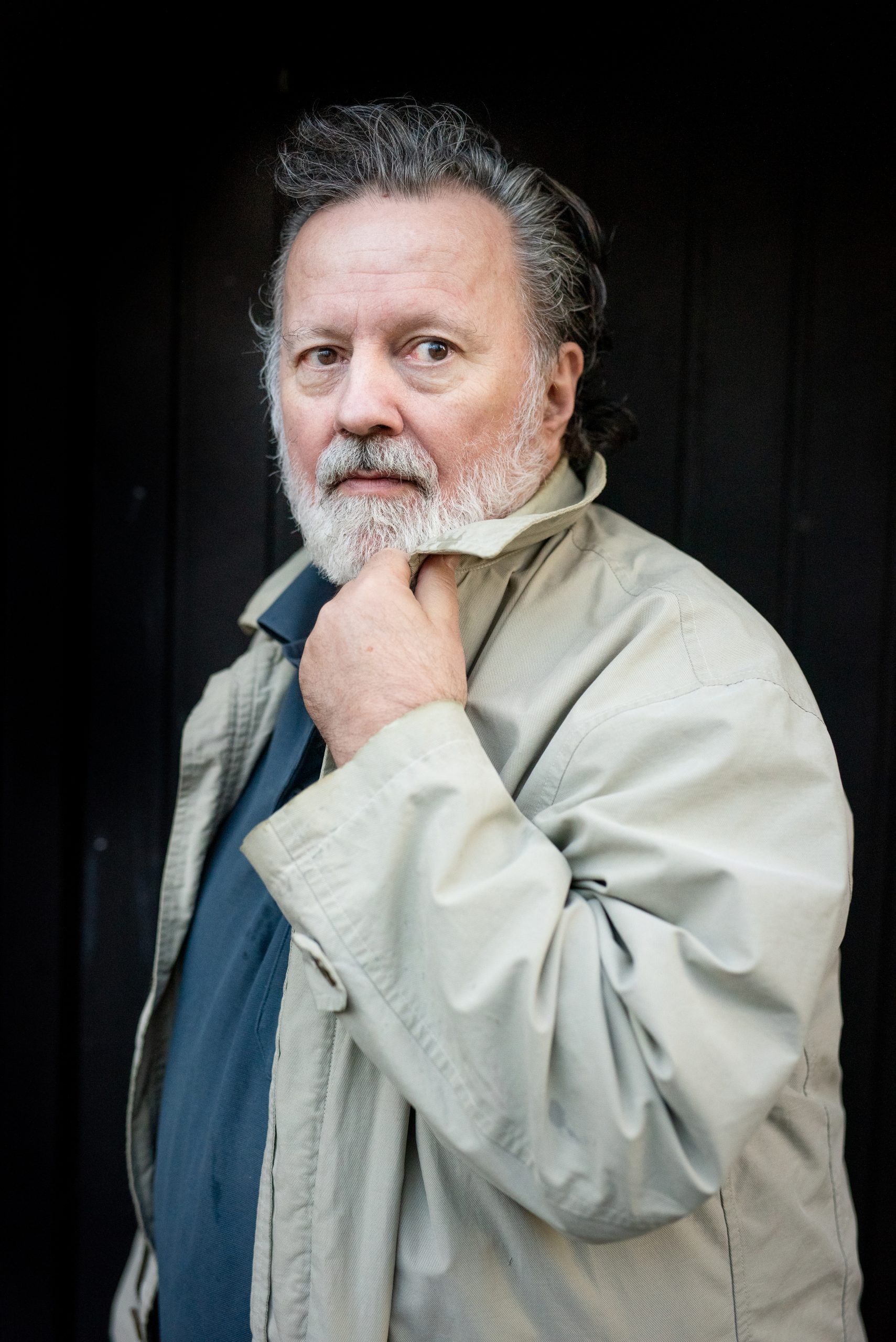 Time is a rather unpredictable factor in Cornelia Greef’s artistic work. Sometimes, she finishes a piece in a single hour. Then again, it takes her many weeks to complete something. “I will set them aside time and time again until I find just the right part at some point or come up with just the right idea.” All of her collages are created unconsciously, the artist explains: “I never think about a theme beforehand.” The finished work does, at times, tell her why things ended up the way they have, however. “In retrospect, I can often see some themes in my collages that are somehow connected to me. They make some diffuse thing inside me visible. They give me clarity and make me think;” Greef says. “It is a way of processing emotions, as well as subjects I am surrounded by – in the news and from other sources. It’s almost like a kind of diary.” The three years of her artistic work so far have seen some phases with recurring motives already. While her the early works often showed stage setups, windows offered a view at what was behind them later. The pool is another frequent element, as is the theme of lonely women in strange worlds. Apart from that, “architecture always plays some role, be it from the inside or the outside”.

Every new picture Cornelia Greef creates is first shown to her partner, Tom Blankenberg, even now. He would like to tour his partner’s collages – as the musician and composer writes in a text on her website. Many other viewers probably have similar feelings about this. It’s just a matter of finding out which path to take to reach the wondrous, unknown, and at times strange worlds of Ms Greef. Let the journey begin. 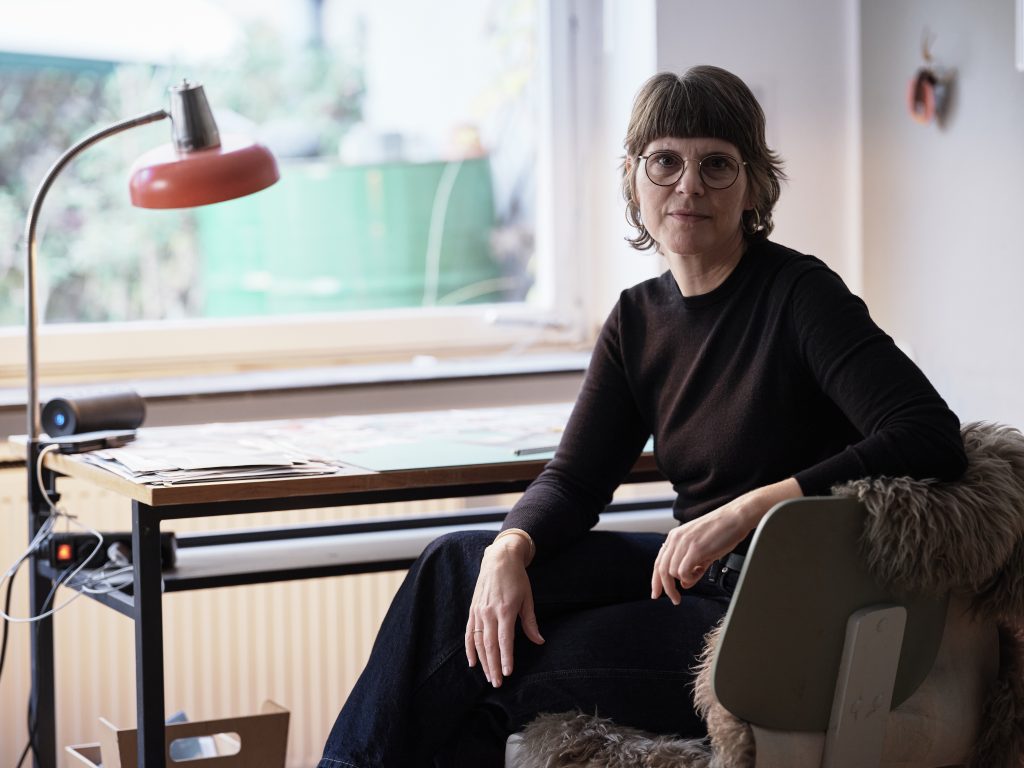 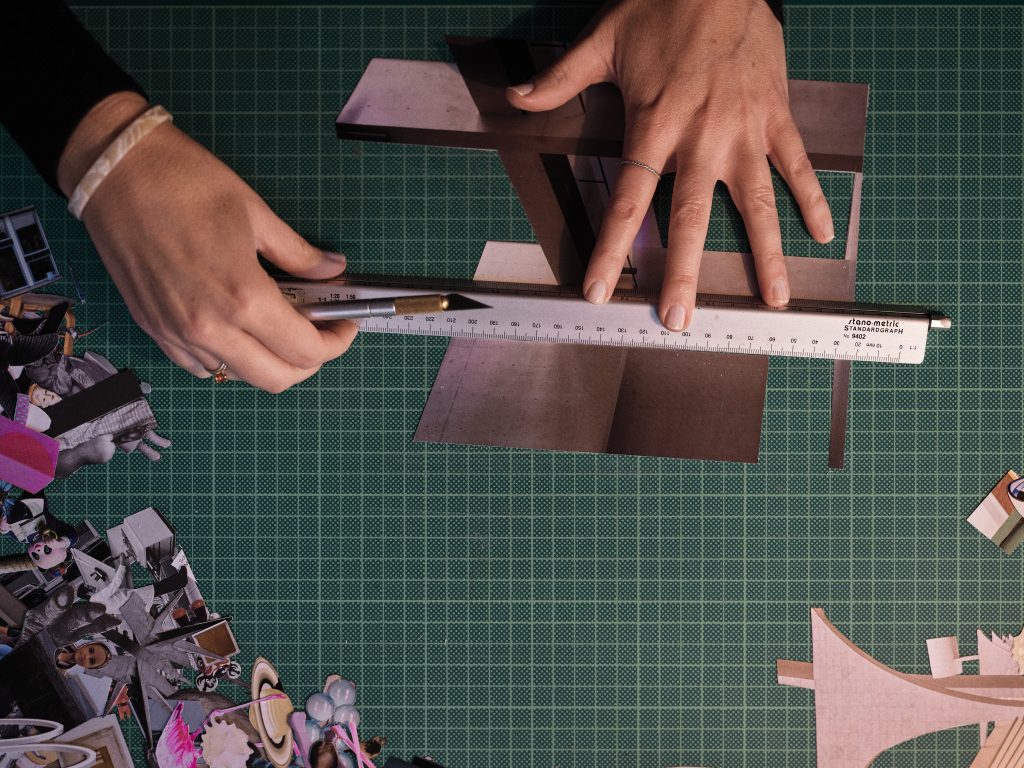 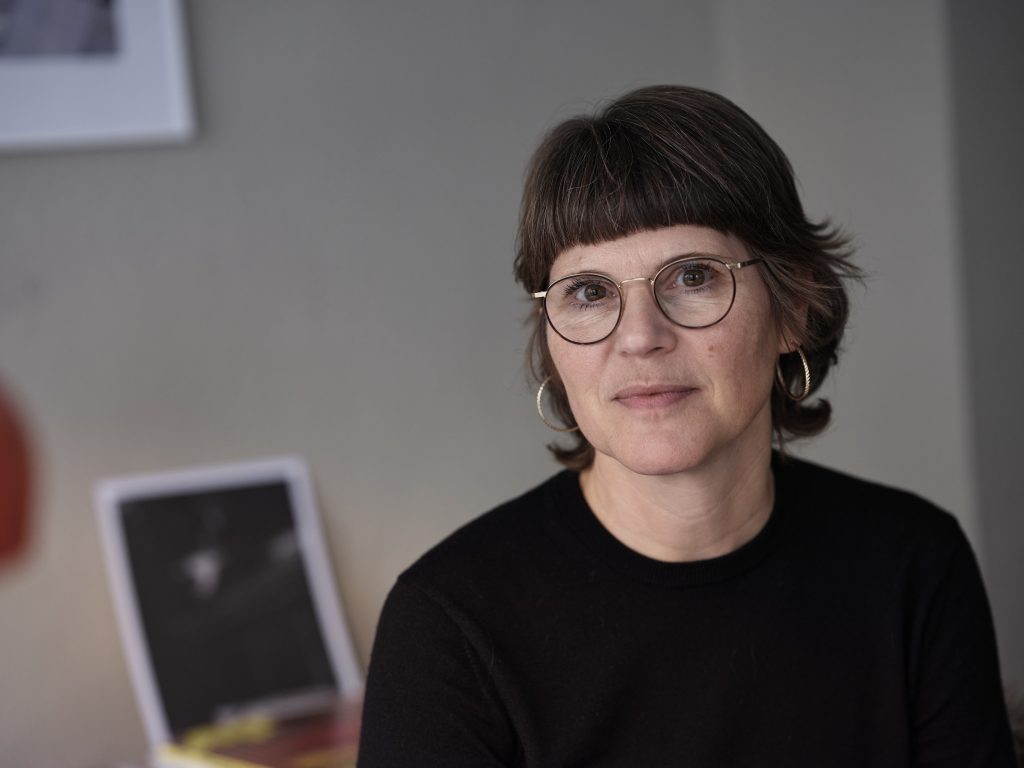 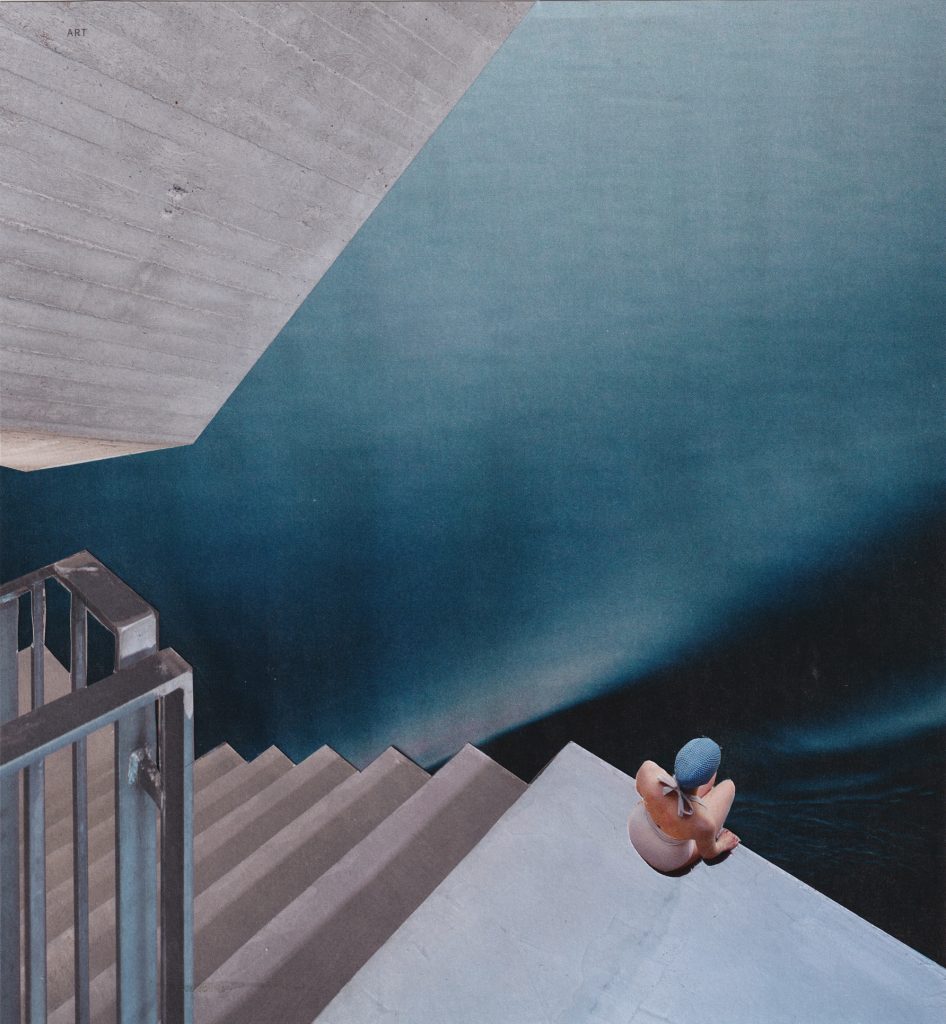 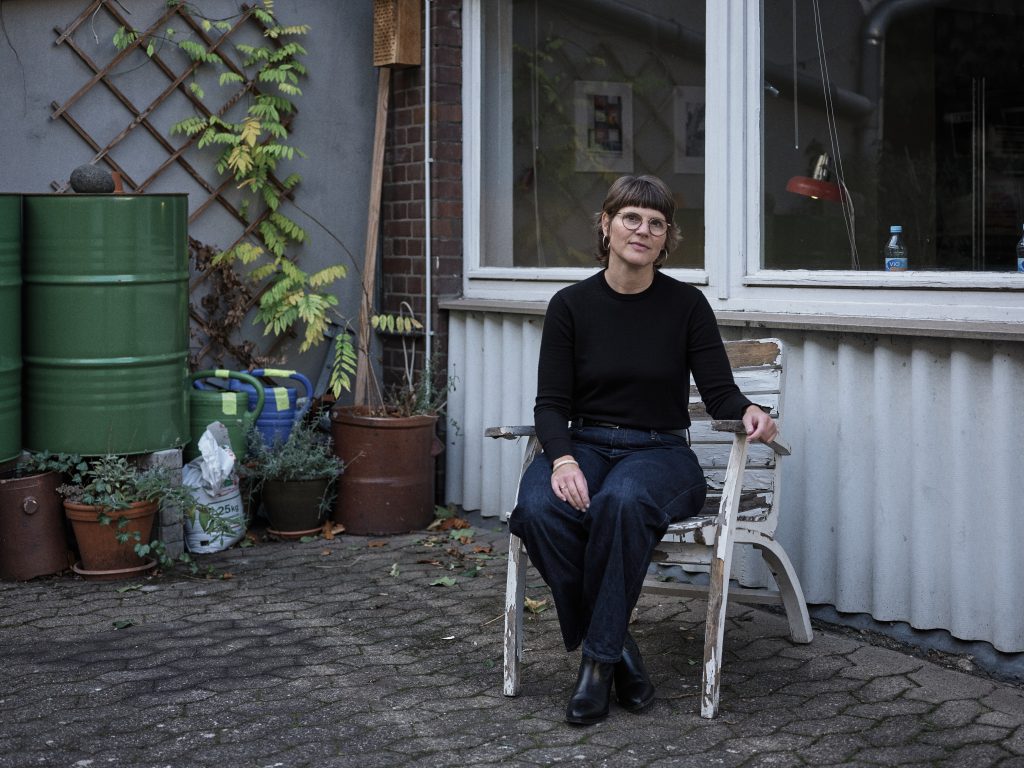 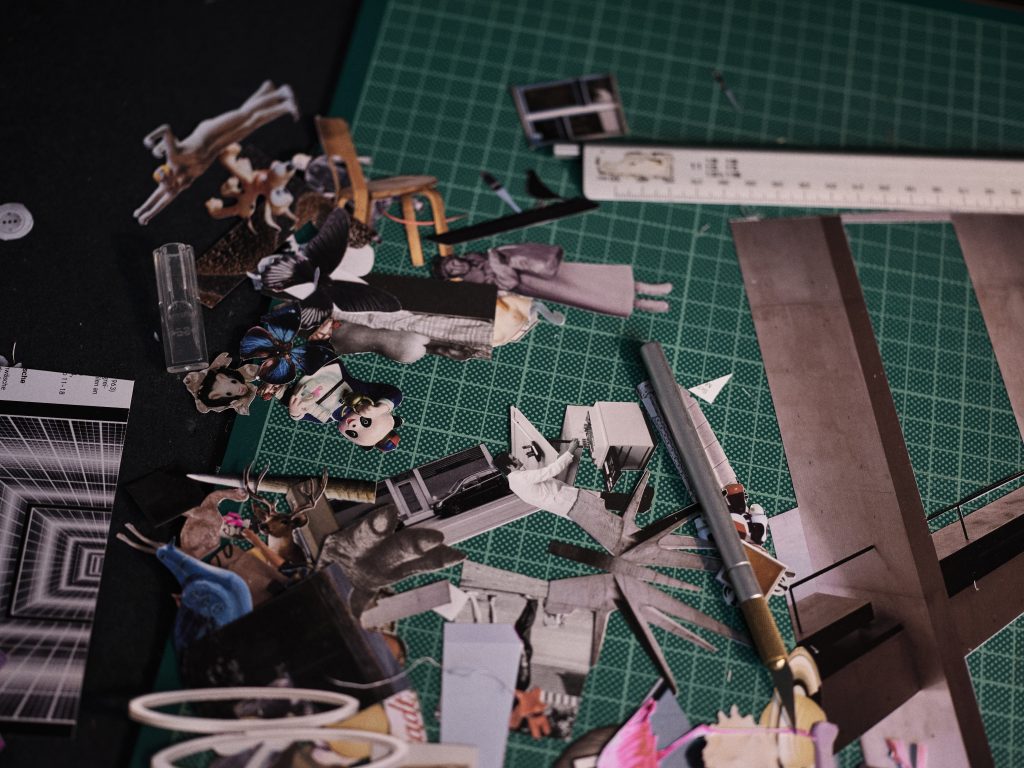 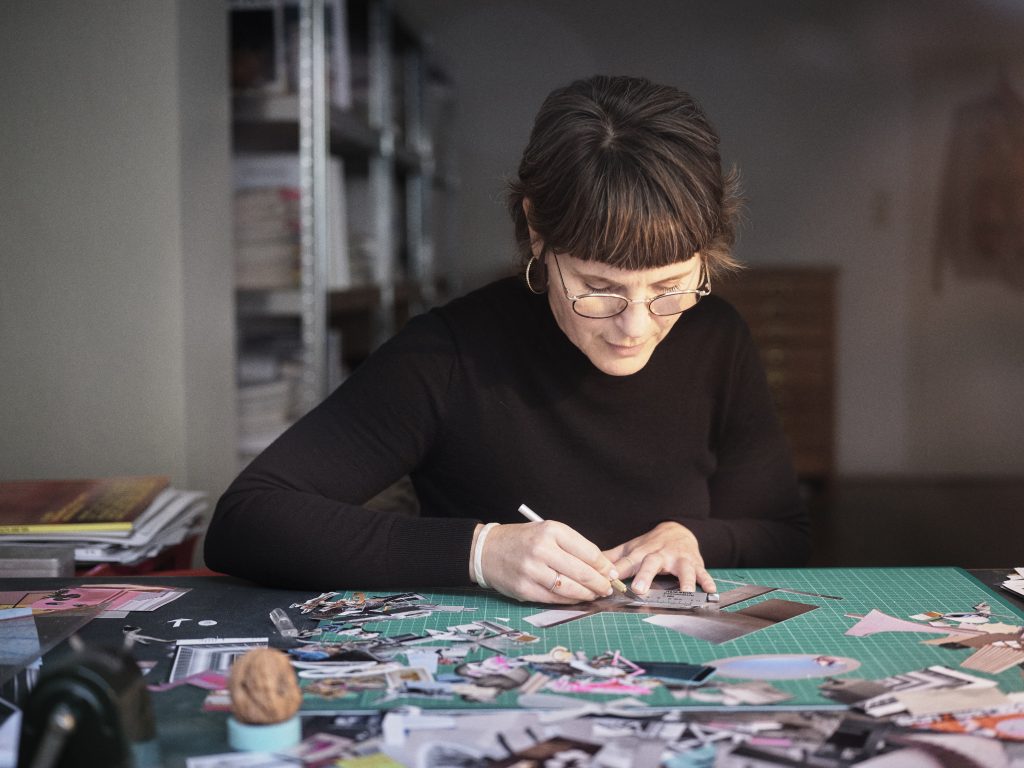 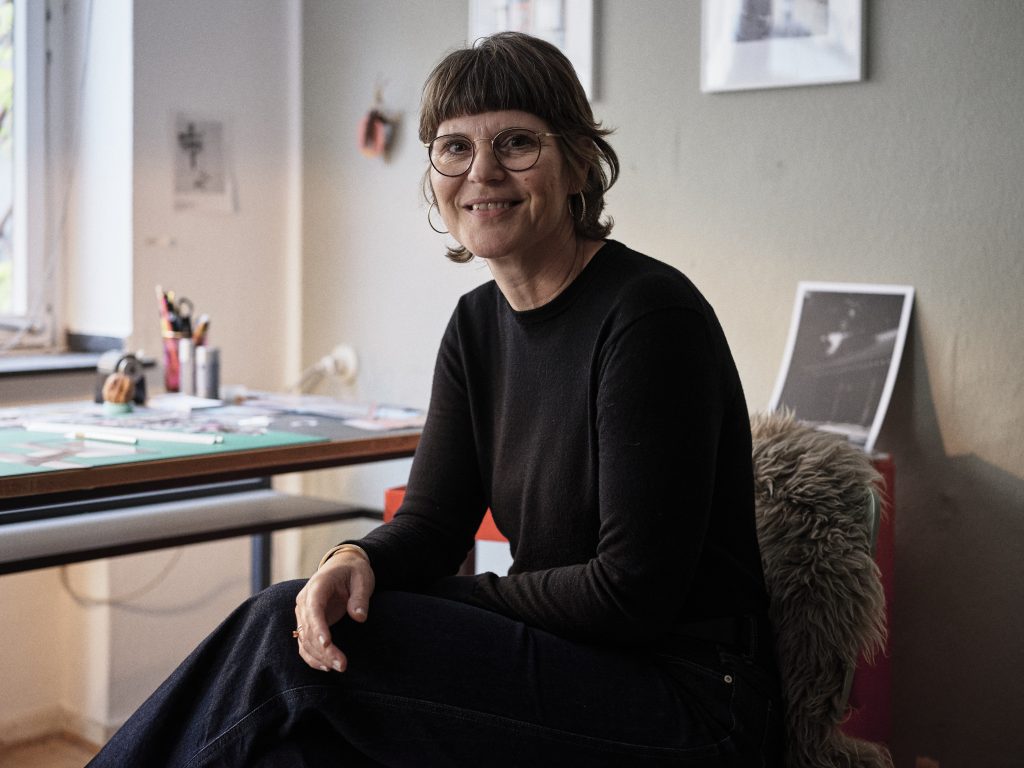 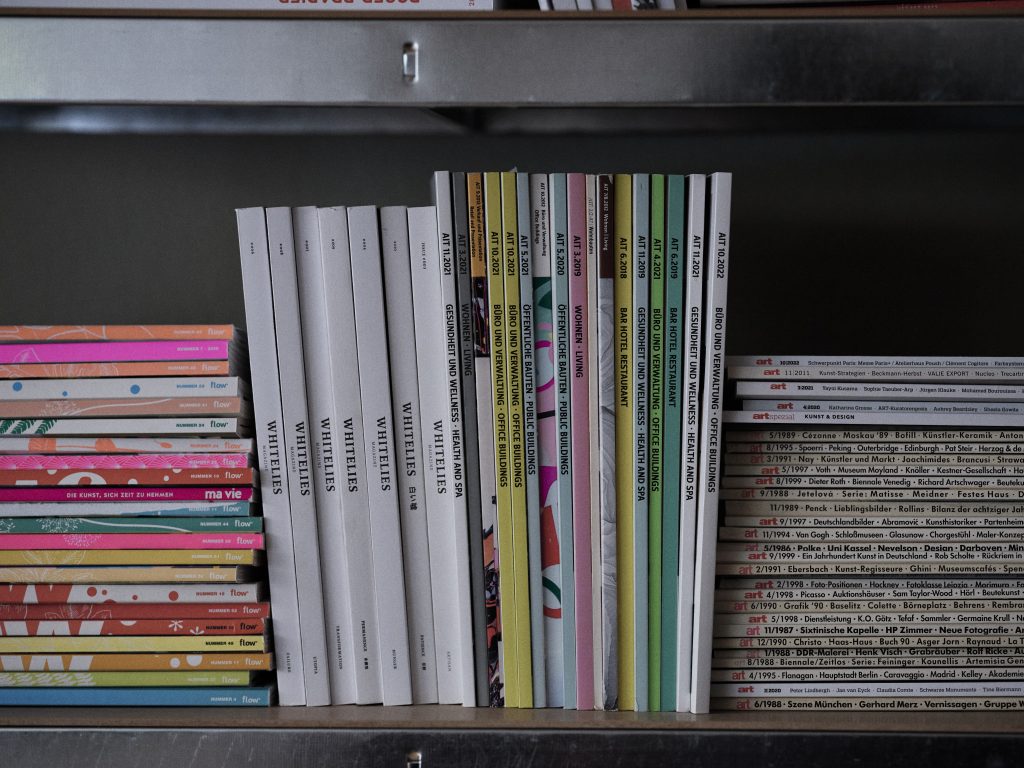 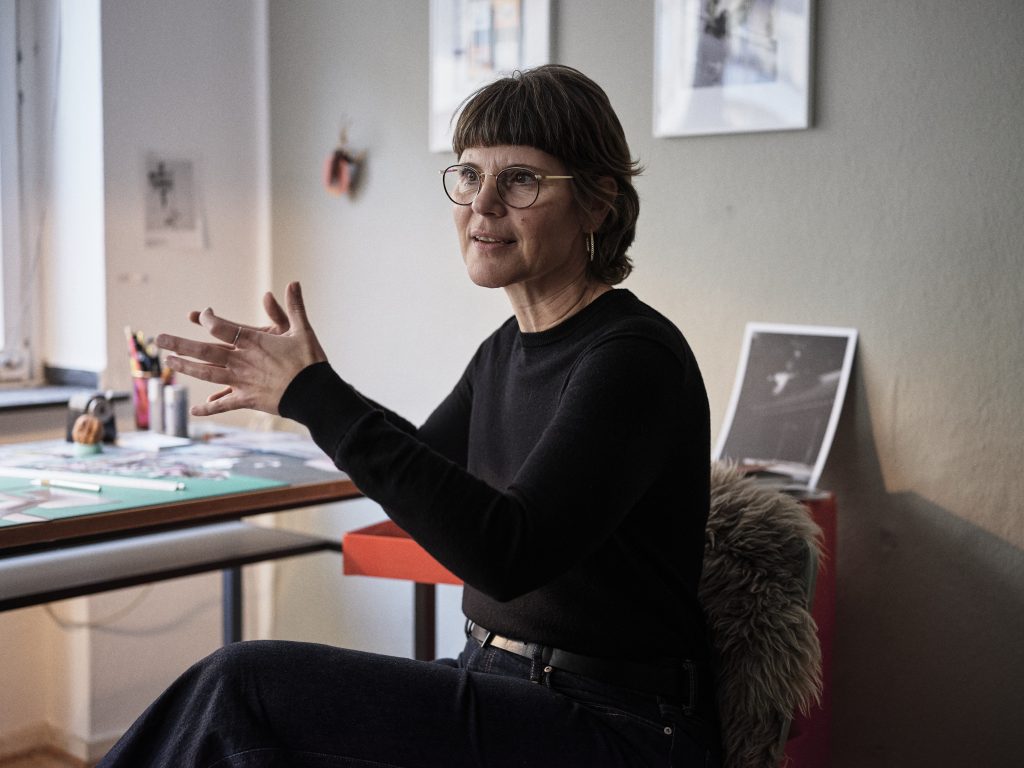 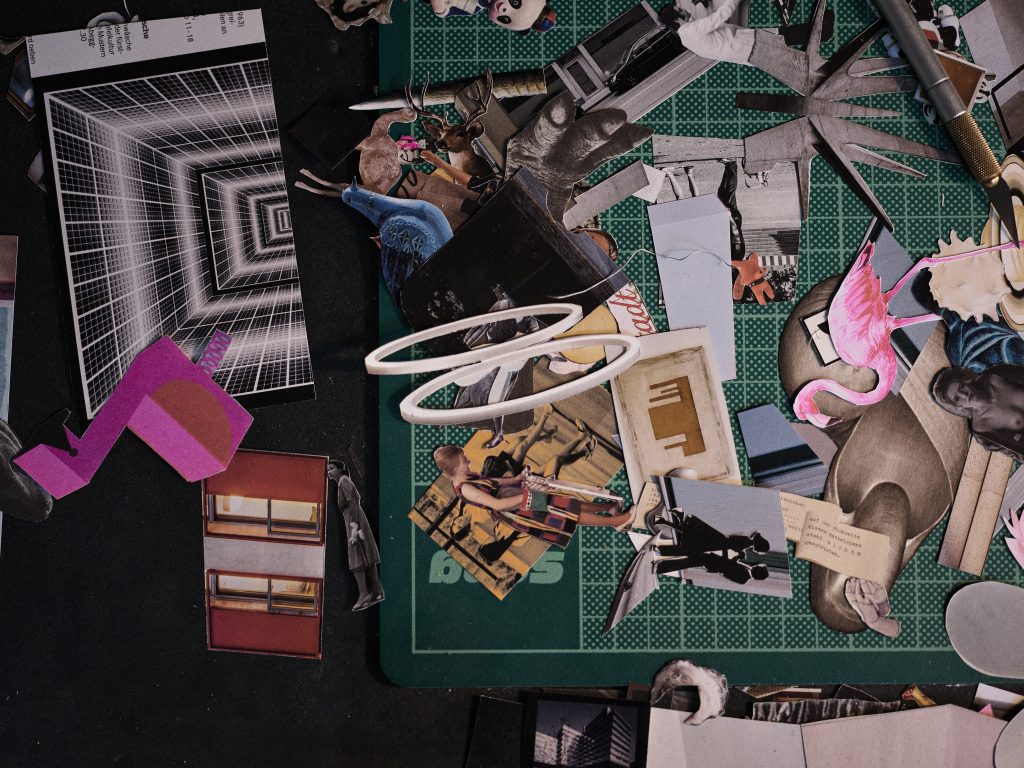 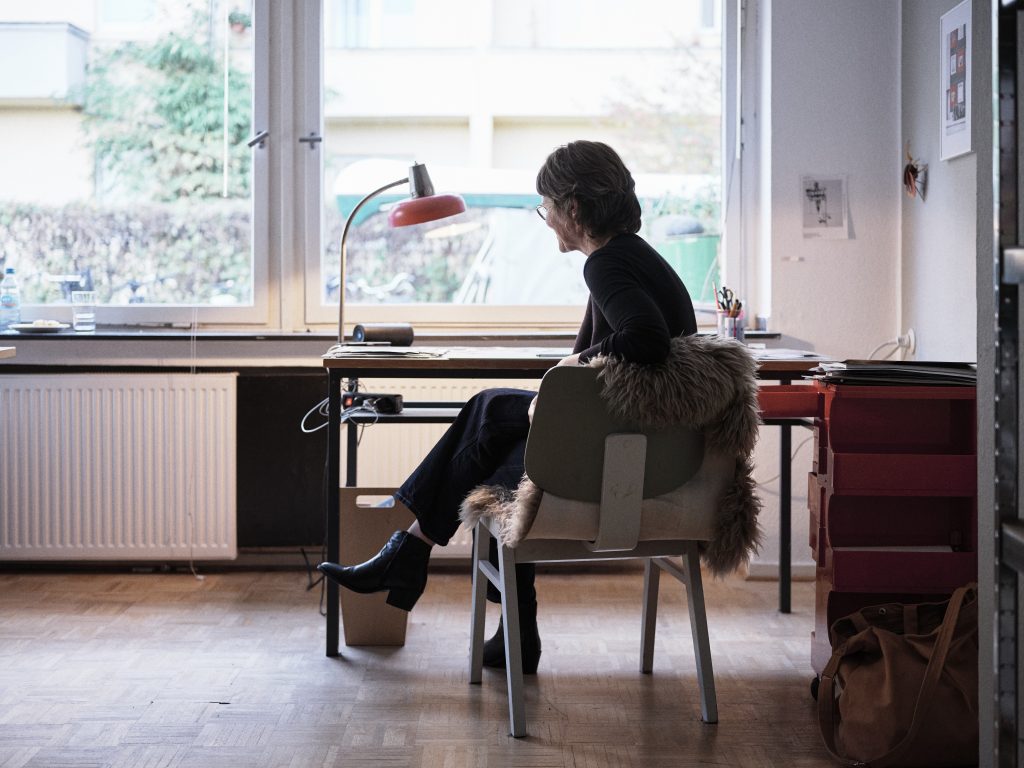 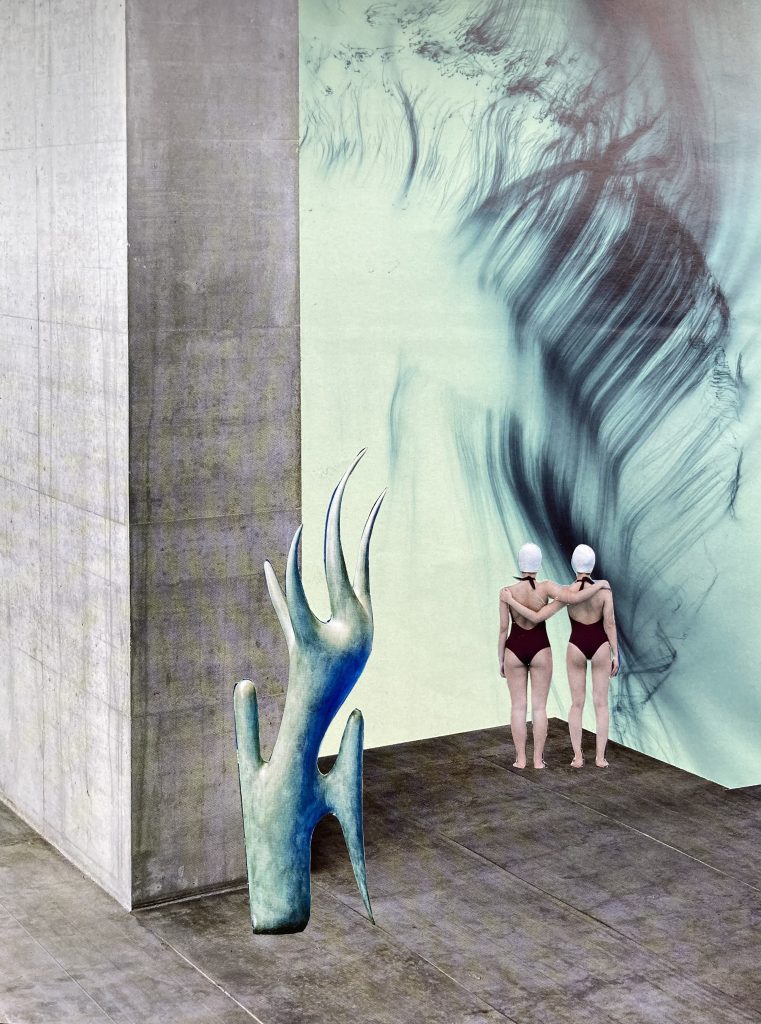 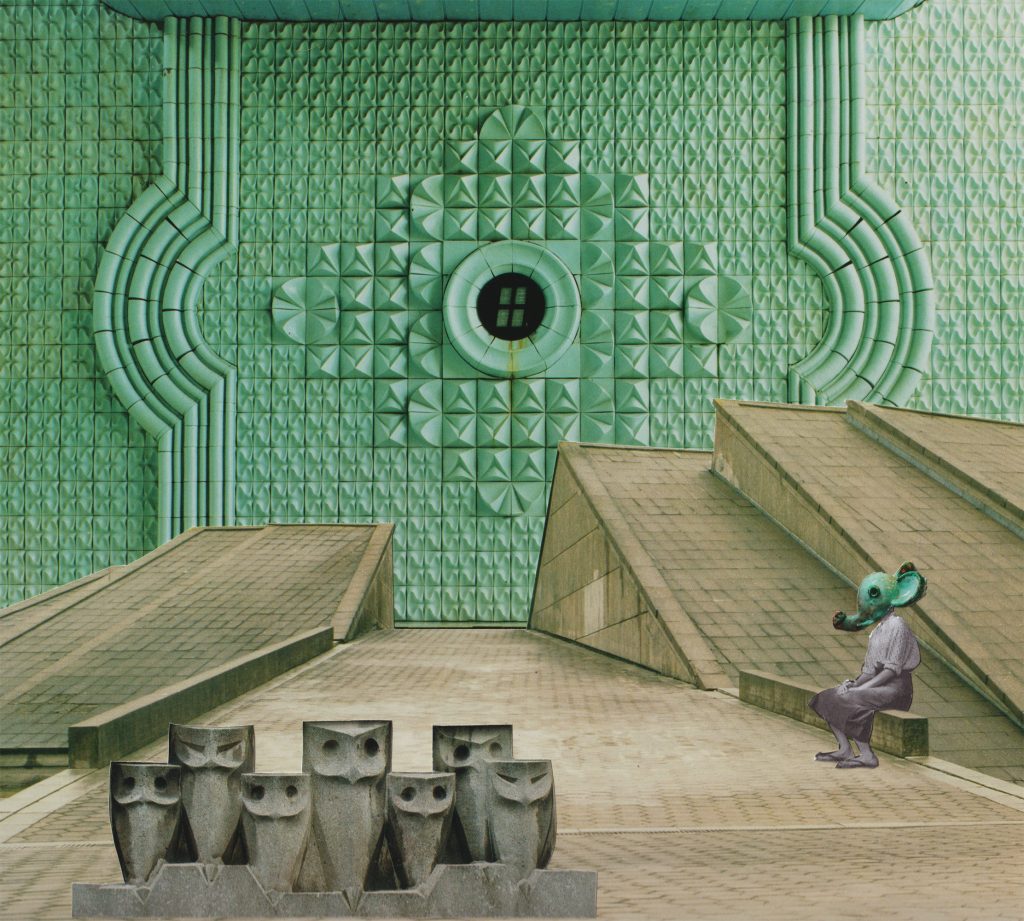 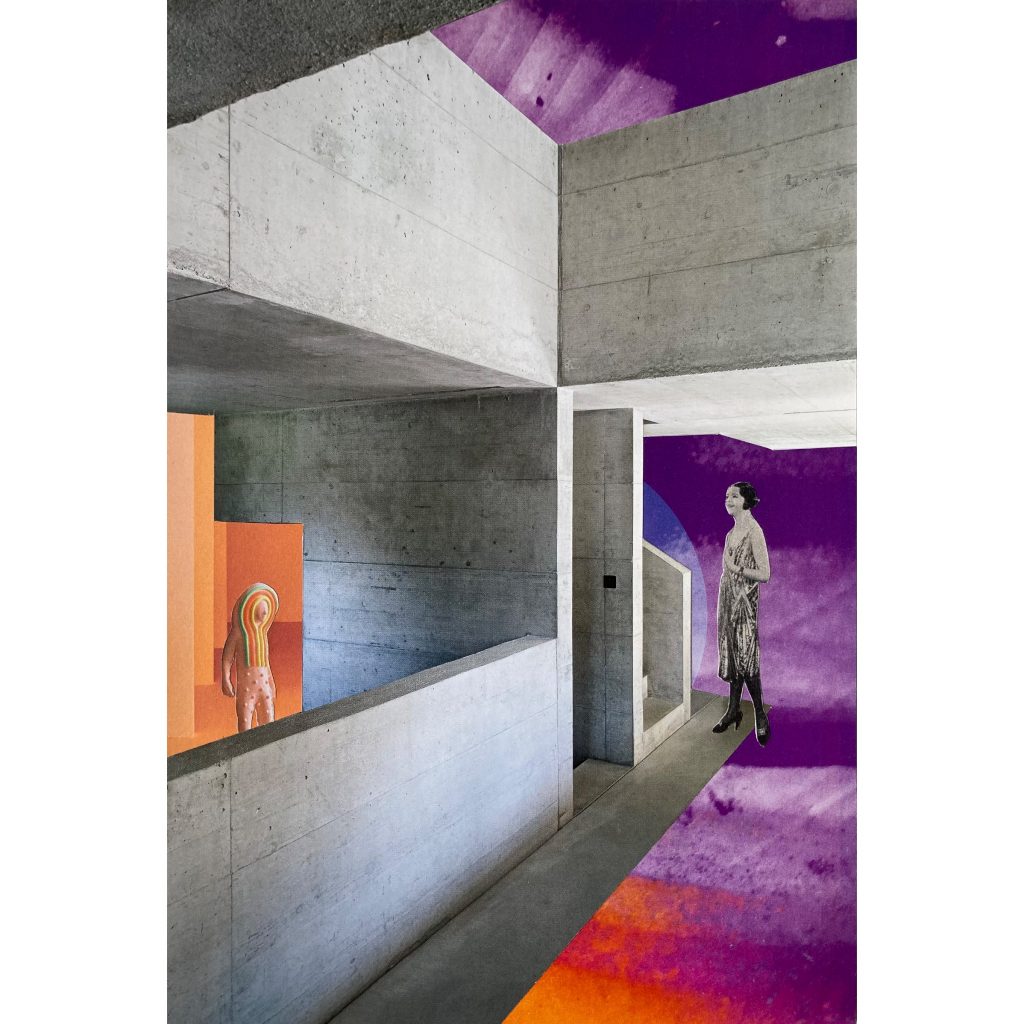 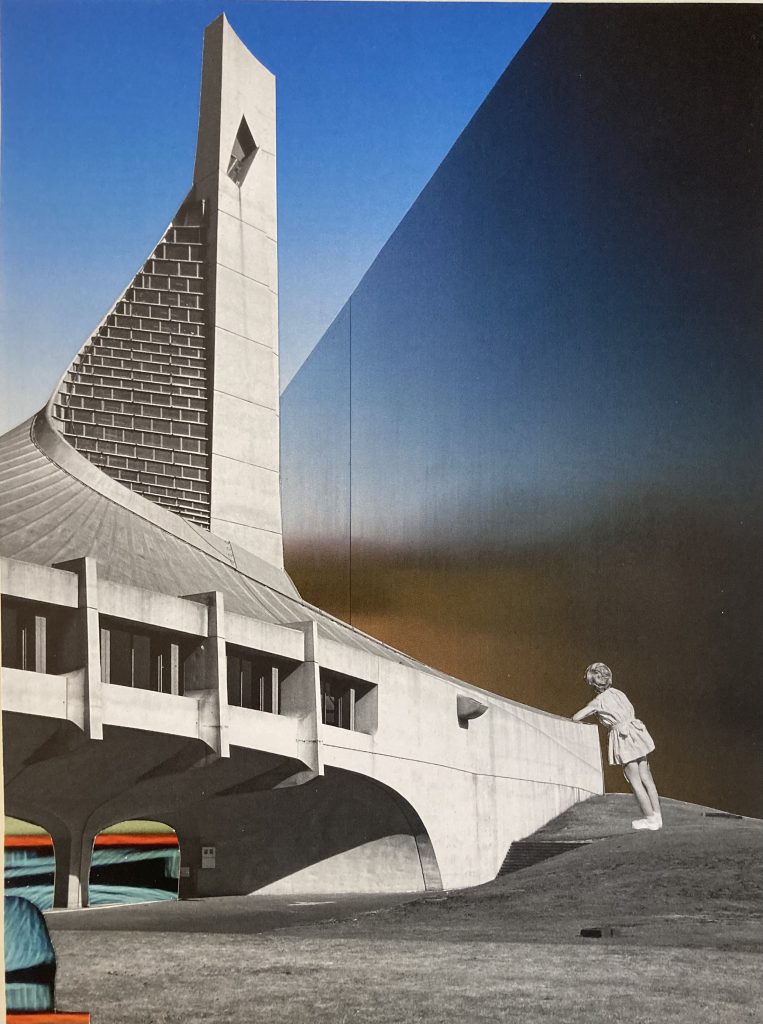